The recently freed Iranian-American pastor Saeed Abedini has been reunited with his children in Boise, Idaho. But the Abedini family may be in for tough times after his wife took legal action against him in court. 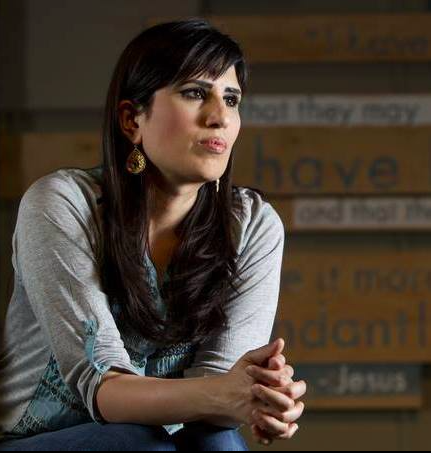 “Nothing has made me happier than seeing Saeed freed from his chains and in American soil,” Naghmeh Abedini posted to her 80,000 Facebook friends Wednesday (Jan. 27), while adding that she filed domestic legal papers to ensure her children stay in Boise.

Saeed was released on Jan. 16 after nearly three and a half years in prison in Iran.

In her post, Naghmeh said she regretted hiding from the public her allegations of domestic abuse. She also said that three months ago her husband threatened her with divorce.

“Saeed told me things he demanded I must do to promote him in the eyes of the public that I simply could not do any longer. He threatened that if I did not, the results would be the end of our marriage and the resulting pain this would bring to our children.”

As of yet, Saeed has not commented publicly about the case filing or his wife’s abuse allegations, which first surfaced in November. His spokesperson did not immediately respond to a reporter’s inquiry.

In his first interview since release from prison, Saeed told Fox News he was beaten during a prison interrogation and threatened with execution.

Iran sentenced Saeed to eight years in prison, but detailed charges were not made public. At the time of his arrest, Saeed was setting up a home for orphans. Previously, he was involved in creating a network of house churches, something that Iranian authorities prohibit.

On Facebook, Naghmeh said her goal was reconciliation, not divorce. “I have taken temporary legal action to make sure our children will stay in Idaho until this situation has been resolved. I love my husband, but as some might understand, there are times when love must stop enabling something that has become a growing cancer. We cannot go on the way it has been. I hope and pray our marriage can be healed.”

Her Facebook followers were largely supportive of the court action. “Saddened by the truth but the truth always sets free,” one woman posted in the comments section. The Abedinis are members of Calvary Chapel in Boise.

Through much of 2015, Naghmeh engaged in a nationwide campaign to secure her husband’s release from prison, drawing the attention of President Obama and top human rights and religious leaders.

In early January, Iran and the U.S. agreed to a “prisoner swap” that resulted in the release of Abedini, Nosratollah Khosrawi, Washington Post reporter Jason Rezaian and  former U.S. Marine Amir Hekmati. The U.S. released seven Iranians held in U.S. prisons, and so far all seven have chosen to remain in the U.S. 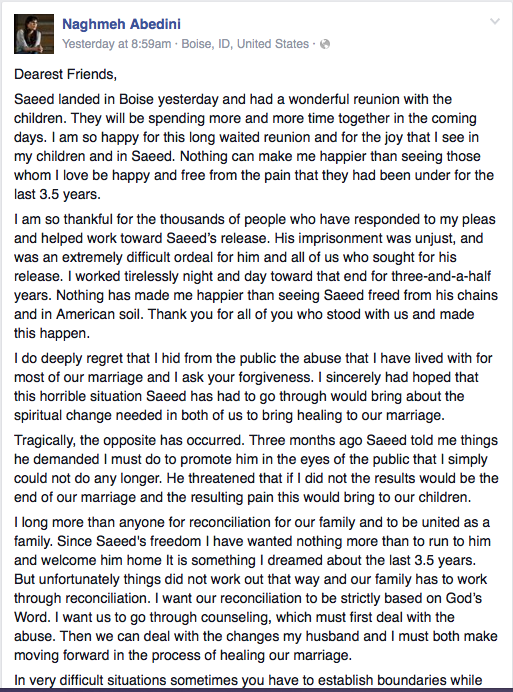 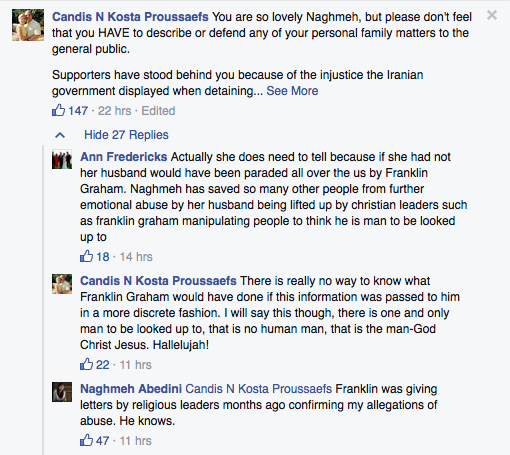