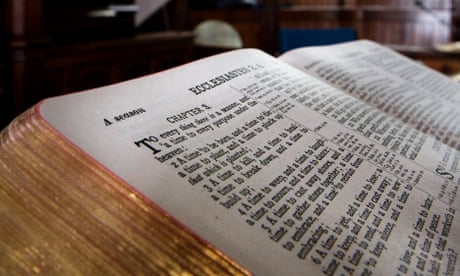 Churches that are theologically conservative with beliefs based on a literal interpretation of the Bible grow faster than those with a liberal orientation, according to a five-year academic study.

“If we are talking solely about what belief system is more likely to lead to numerical growth among Protestant churches, the evidence suggests conservative Protestant theology is the clear winner,” said David Haskell, the Canadian study’s lead researcher.

The findings contradict earlier studies undertaken in the US and the UK, which attempted to discover the underlying causes of a steep decline in church attendance in recent decades but concluded that theology was not a significant factor.

The results of the new study are likely to fuel anxious debate among church members about the reasons for decline and what measures or approaches might stimulate growth. Those promoting evangelical styles of worship and strict adherence to what they see as biblical truths will be bolstered by the findings.

The authors of Theology Matters: Comparing the Traits of Growing and Declining Mainline Protestant Church Attendees and Clergy surveyed 2,225 churchgoers in Ontario, Canada, and conducted interviews with 29 clergy and 195 congregants. The paper is to be published in next month’s issue of the respected international journal, Review of Religious Research.

The researchers compared the beliefs and practices of congregations and clergy at mainline Protestant churches whose attendances were growing with declining churches. On all measures, the growing churches “held more firmly to the traditional beliefs of Christianity and were more diligent in things like prayer and Bible reading,” Haskell said.

Among the key findings are:

According to Haskell, research on general social groups has shown that those with a consistent unified message and clear boundaries with people outside the group are attractive to outsiders.

“Conservative believers, relying on a fairly literal interpretation of scripture, are ‘sure’ that those who are not converted to Christianity will miss their chance for eternal life,” he said. “Because they are profoundly convinced of [the] life-saving, life-altering benefits that only their faith can provide, they are motivated by emotions of compassion and concern to recruit family, friends and acquaintances into their faith and into their church.

“This desire to reach others also makes conservative Protestants willing to implement innovative measures including changes to the style and content of their worship services.”

Theologically conservative believers were more unified in terms of priorities and what was right and wrong, he added. “That also makes them more confident and, to those on the outside looking in, confidence is persuasive all on its own. Confidence mixed with a message that’s uplifting, reassuring or basically positive is an attractive combination.”

Haskell said he expected the findings of the study, which was not commissioned by any group or organisation, to be controversial. “If you’re in a mainline church and that church is dying, and you’ve just heard that the theological position that you have is likely what’s killing it, you’re not going to be very happy about that,” he said. “Theological orientation cuts to the very core of the religious practitioner.”

In the UK, attendance at Church of England services dropped by half between 1980 and 2015. Statistics published last month showed that 960,000 adults and children – less than 1.5% of the population – went to church each week during the sample month of October 2015. The C of E has launched a programme of evangelism in an attempt to stem the decline.

The Pew Research Centre reported last year that that the congregations of Protestant churches in the US were decreasing by up to a million people a year. Canada’s four largest mainstream Protestant churches have seen their membership drop by half since the mid-1960s while the population has nearly doubled